One Deadly Rhyme - The Number Mysteries 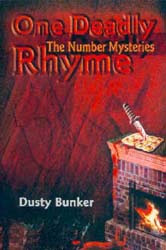 He worked under a ragged lampshade the color of dead leaves. To his left, a recent issue of Time magazine lay in shreds. Like his past, he thought, scissors poised in midair.

His eyes slid toward the shiny numbers and letters spread to his right in neat rows and over the bottle of Elmer's glue and package of generic white paper.

Focusing once again, he cut around the letter G, held it at arm’s length, and squinted.

Damn it! The crossbar was uneven.

He tossed it aside and pulled over the slashed magazine, recalling his childhood fury at going outside the lines of his coloring book. Not that anyone cared.

His foot tapped as he jabbed at the bottom corner of the right page with his forefinger.

He licked his finger and jabbed again.

Then he found it! An ad with a thick black border dotted with white fish icons. Inside lay a message from Deuteronomy 8:11-20. "Be careful that you do not forget..."

Right on. They won't forget this.

"...that you will surely be destroyed."

Ain't that the truth.

The 'g' in forget was perfect. He placed it with the others, then reached for his cigarette and took a tug.

He gazed out the grimy window over the wheat-colored grass and the dying crocuses his dead mother had planted at the corner of the tool shed. Wraith-like arms of mist curled around the weathered boards. Ghostly reminders. He visualized spring clawing up through the cold New Hampshire ground.

Sizzling in the frying pan behind him in the smoky room, a steak sucked at his taste buds. He laid the smoldering cigarette in a mayonnaise cap that served as an ashtray, and with his forearm, wiped the tiny rivulet of drool from the corner of his mouth. Then he began murmuring the words to "Pretty Woman" in synch with the foggy voice of Roy Orbison that issued from the radio. He liked Roy. Even Elvis had fashioned his style after the man in black.

Setting the magazine aside, he pulled a piece of paper from a package and smoothed it a few times, feeling the hard wooden surface beneath. Through clear rubber gloves, he could see new hair sprouts on the back of his hands. Time for another plucking session.

Gracie watched his every move. Let her watch. She didn't bother him.

He scratched the center of his chest.

This note would be a work of art, word perfect. He snickered at the pun. Yes, If you're going to do a job, do it right. He mumbled the message his mom had pounded into him for more years than he wanted to remember. Not that he’d ever listened.

An excruciatingly pleasant tingle rippled from his scalp, over his shoulders, and down to his groin. He waited for the hardness to subside.

Then he got up, stepped over to the avocado stove, and waved a hand over the black skillet to dispel the smoke. Carefully turning the thick steak with a long pointed fork, he laid in three slices of Bermuda onion. With a padded oven mitt on his hand, he shimmmied the heavy pan and watched the fat dance and sparkle like fireflies in the gloom.

Satisfied, he reached for the ruler and number one yellow pencil and marked off both sides of the paper in one and one-quarter inch increments. Seven light horizontal lines completed phase two. He held the sheet before him.

Yes! You will approve.

From the back of the book jacket propped against the wall, she smiled back at him.

Placing the sheet of paper back on the portable desk, he rolled his stiff shoulders, then slowly cracked each knuckle.

Smoke from the cigarette spiraled serpent-like in the diffused light. He picked up the white cylinder, twisted it between his fingers, stared at the ash gray tip. Mom never smoked. Mom detested the filthy things. But mom never knew about this vice.

A long drag brought on another coughing jag that nearly rendered him unconscious, but he would never submit to those black fugues again. He had learned control.

He replaced the cigarette in the jar cap sitting on top of a stack of magazines.

Gracie's eyes were on him again. She wanted him. With an impatient sigh, he went to her.

She didn't move. She liked toying with him.

He sneered. If she didn't respond, she wouldn't eat. That's all there was to it. It was her own fault.

Now for the message that would set this New Hampshire town on its ear.

Back at the table, he used a pair of tweezers to turn the first number over onto a clean sheet of paper, spread a few drops of Elmer's glue with a Q-tip, and watched the second hand on the greasy wall clock lurch over black sexagesimal wedges.

He tapped his foot as he recited a nursery rhyme his mother had taught him.

One a penny, two a penny, hot cross buns.

If you have no daughters, give them to your sons.

Laughter bubbled up in his chest.

Time’s up. The glue will set better now.

Funny how strokes of ink on paper can send chills down your spine. His eyes narrowed. Well, mom, what do you think of your son now?

When he was done, he scooped up all traces of his work, placed them inside the portable desk, and moved to his bedroom, where he slid the desk under his bed. This was his room. No one was allowed in. He locked the door.

He returned to the kitchen where his steak awaited. Rare. The only way to eat a fine cut of meat.

When he was through eating, he’d lock Gracie in his room and clean up the kitchen real good so nobody could tell he'd even been there. The kitchen was a woman's place, after all.

He sliced a piece of meat into a perfect triangle, speared it with the fork, and held it before his eyes. He examined its grain. Saliva collected at the corners of his mouth as he anticipated the tangy feral taste.

He held the fork before his eyes for a long time. Discipline, restraint, and anticipation carried their own rewards.

Slowly he put the meat in his mouth as interior cells rose up to embrace the raw flesh like a black widow welcoming her mate.

He chewed it slowly, sensually.

He cut another triangle.

He seemed unaware of the blood dribbling down his chin. As he got into a rhythm, his thoughts shifted to the note hidden in the portable desk under his bed.

This was what he was born for.

"What's wrong, Charlie?" Samantha Blackwell sank back into the sofa cushions on her sun porch. Nick had just left for work, and she was munching an apple and gazing out into their wooded back yard, trying to quell an uneasy feeling that had arisen moments before the phone rang.

"It'll be all over the papers tomorrow," Charlie said, "and for certain on Channel 9 tonight. And you're right in the middle of it."

Lifting drowsy lids, she responded, "What did I do? Forget Selket's leukemia shot? Is that a police problem?"

She pulled an ash blonde hair from the arm of her nightshirt and watched it float to the floor. She didn’t want to hear any bad news.

"Forget the cat, Sam. I'm serious. It's Doug Hammand. Lenny and I found him dead in the frozen fish section of McCutty's Market. With a note pinned to what was left of his suit jacket."

The apple fell from her hand as she bolted upright. "No! What happened?"

The cat periscoped up, her head swiveling.

A note pinned to Hammand's chest. That had to mean murder. Doug, a model of plaid and chino, wasn't the kind of man to run to the grocery store in his one suit with a note attached to his lapel.

Crazily, Sam thought back to the time when her two daughters had climbed the steps of the school bus with those identifying manila tags attached to their buttons as if, in case they got lost, they could be dropped into the nearest mailbox. She pulled herself back to the present as a 5.8 registered across her shoulders.

Charlie was still talking. "McCutty went back to the store last night around 11:00 because he thought he forgot to turn on the alarm. You know he had that alarm installed a few years ago when he noticed problems with shoplifting. Well, he took a walk around the store like he always does, just to double-check things, and that's when he found Hammand, fish-eyed with the frozen flounder. Had some kind of flower stuck in his buttonhole. McCutty almost had a heart attack. Called 911, then fainted dead away behind the cash register. That's where we found him."

"My God! Doug Hammand." She unconsciously patted her chest as if that would still her quaking heart. Selket, sensing danger had abated, settled down once more.

"Yeah," Charlie said. "I got the call around 11:30. Found Doug with his legs sticking out of the freezer case, colder than a witch's teat, wearing a cowberry necklace. He was strangled." His voice wavered a bit. "And cut up some. By the time we finished with the crime scene, it was 2:00 A.M. Didn't think you'd appreciate a call at that time in the morning."

Sam wondered why Charlie would call her from the crime scene, but all she could say was "Cowberries?" Her childhood friend was now the chief of police in their town, but he didn’t consult with her on cases.

"Well, they're fake, but they're definitely cowberries. Probably got them from one of the lampposts in town."

The windows of her mind fogged. Why are we talking about cowberries? "What about the note, Charlie? What did the note say?"

"Here's the kicker, Sam. The note mentions you."

Sudden clarity! An 8.1 rumbled. Sam clutched at her nightshirt as the blood drained to her feet. "Me? Why me?"

"The note is in some kind of code. Numbers and letters, glued on a piece of white paper, cut out of a magazine most likely. At the bottom, it says: ‘Catch me if you can, Sam Blackwell.’"

"Oh, my God!" She swallowed hard and scanned the doorways, her mind searching for a place to hide.

"Sounds like some kind of psycho that reads your numerology column or books. Not that people have to be nuts to read your stuff," he added quickly.

Her knuckles were white around the phone. "You think it mentions me because of the code?"

"Don't know. There’s no rhyme or reason with some of these guys. Maybe this guy’s got a crush on you from that sexy picture on the back of your book jacket. Maybe he wants to match wits with you. Maybe he likes blondes or wants his picture in the paper. Maybe he's one of your clients. Who knows? I've been through a thousand reasons why since midnight."

Sexy, all right, Sam thought, relieved to switch gears, if only momentarily. Good thing the picture was taken before she gained the thirty extra pounds. She looked down at the mound of red plaid belly resting on her lap then berated herself for thinking about her looks when poor Douglas would never have to worry about such things again. Her mind ping-ponged between fear and disgust.

"Gonna be there for a while?" Charlie asked. "I want to show you this note."

Click on The Number Mysteries below to read a few chapters from my mystery series starring numerologist Samantha Blackwell. Intrigued? You can order the mysteries directly from these sites. Best to read them in order according to the titles...One, Two, and Three.